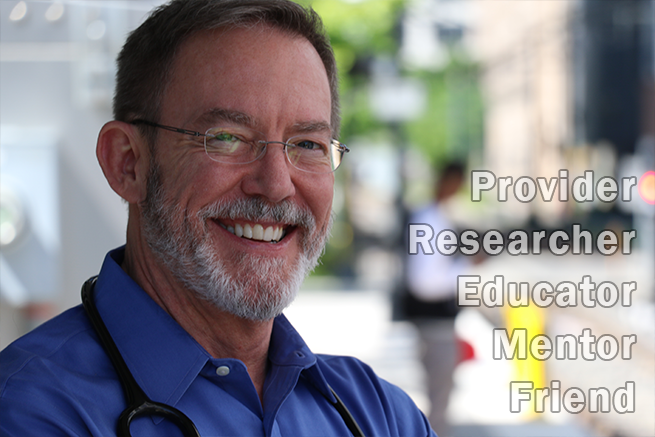 Wesley Thompson is the HIV Medical Director of Amity Medical Group. Amity Medical Group currently has three locations, 6010 E. WT Harris Blvd., Charlotte, NC 28215, 10508 Park Rd – Suite 130, Charlotte, NC 28210, and 9835 Monroe Rd Suite B, Charlotte, NC 28270. Wesley sees patients at the Harris Blvd. location. He has been in practice for 30 years providing primary care to the HIV/AIDS population of Mecklenburg County and surrounding counties as well as routine medical care to the LGBT community. Wesley is a board certified physician assistant and the first physician assistant to be certified as an HIV Specialist in the state of North Carolina and one of the first in the United States. He has co-investigated in over 60 clinical trials for new medications in the fight against HIV. Wesley has had the honor to serve as guest lecturer at Davidson University, Duke University, UNCC, CPCC, Wake Forest University and as an Adjunct Professor at Wingate University. He also serves as a speaker for the National Ryan White Action Campaign. Wesley serves on the North Carolina AIDS Drug Assistance Program (ADAP), sits on the board of CarolinasCare AIDS Service Organization, and is co-chair of the Southeast Chapter of the American Academy of HIV Medicine. He served on the Board of Directors for the Regional AIDS Interfaith Network (RAIN) and the AIDSWALK Committee. He also had the honor of Co-Chairing of the Mecklenburg County Commissioners HIV Task Force and is currently the Co-Chair of the Quality Management Ryan White Grant Committee for Mecklenburg County. Wesley is also on the Board of Directors for the North Carolina AIDS Alliance Network (NCAAN) and is a member of the World Professional Association of Transgender Health (WPATH). In addition, Wesley is the co-lead of the Getting To Zero campaign for Mecklenburg County, North Carolina.

Thompson received his Bachelor of Arts at Wake Forest in 1982, his Bachelor of Health Science and Physician Assistant degree at Duke in 1987 and his Master in Health at Duke in 1991. He was honored with the 2005 www.TheBody.com HIV Leadership Award for his work in the fight against HIV/AIDS. In January 2009, Wesley was awarded the Distinguished Fellow Status from the American Academy of Physician Assistants, and in December 2009,  received the lifetime achievement award from Metrolina AIDS Project (MAP) for community service and ongoing financial support. Most recently, Wesley has been named 2021 America’s Top PA: Infectious Disease – HIV/AIDS by POCN.

Click here to view this story from Spectrum News 1 about combating the stigma surrounding monkeypox.

Click here to view this story at Fox46, featuring comments from Wesley.

Click here to read this new QNotes article about an honor that Wesley just received.

Quoting POCN:
Please join us in congratulating J. Wesley Thompson, winner of the 2021 America’s Top PA Award in HIV/AIDS treatment. Wes is known by his colleagues as being truly compassionate to all of this patients, regardless of race or socio-economic background. Wes has personally co-investigated over 60 clinical trials for new medications to fight against HIV. He was the first Physician Assistant to be certified as an HIV Specialist in North Carolina, and one of the first in the United States.

Includes an interview with Wesley